The exhibition Transience: artworks by Akio Niisato, will investigate the contrast between art and function in contemporary art objects through the transience theme.
A group of porcelain “Luminescent vessels” – the signature pieces of the artist – will be exhibited at the gallery. Vessels are made by a micro-holes structure, incised or drilled one by one and then covered with glaze, giving a glossy effect with chiaroscuro and transparency typical of his artworks: an original and new pattern that covers the object improving fragility and elegance. In this series Akio Niisato explores boundaries and limitations of the form and, at the same time, enhancing its beauty thanks to the transient light.
Also “Coloured” pieces will be presented. They are characterised by regular holes of different diameter and the absence of the glaze.
Both series are related to the concept of transience of the existence. His creations are influenced by Song dynasty ceramics, with perfection of the forms, and by Japanese ceramists of ‘80 e ‘90 with their quest of beauty in the pure forms. Akio work is also inspired by Ikeda Ryoji and Merzbow music, Georges Bataille’s writing and Yves Klein and Kazmir Malevich artworks: all representations of chaos and void. 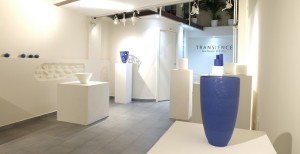 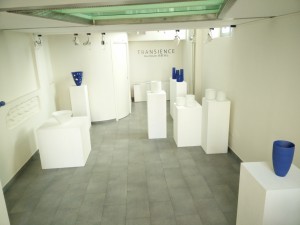